Tenpin bowling is one of the only sports that can be enjoyed and played by all ages, abilities and genders at the one time.

League Bowling is a friendly social competition between groups on a weekly basis.
WYNCITY Superbowl has Team League Bowling for people of all ages and abilities at both Point Cook and Morwell.

We have registered coaches to work with you or your children, and our very own Junior League Guardians who look after all of our junior bowlers. We even supply the equipment!

It promises to be fun and hassle free! 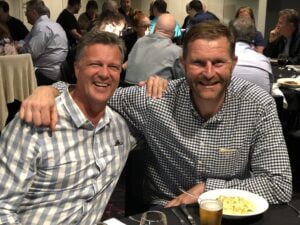 WYNCITY was created by four sisters who were tired of not having a place that both Kids and Adults would love to frequent. And with Wyncity, they have achieved exactly this. Inspired by their father who had successfully owned and operated his own Tenpin Bowling Centres and Restaurants in the past - each of the sisters brought an individual touch to keep WYNCITY continually ahead of the pack. After feeling the time was right to move on, the sisters sort after the right people to continue the business.

Seb and Jason, stalwarts in the out of home entertainment industry took ownership of Wyncity Point Cook and Morwell in June 2021, in what was essentially the middle of the pandemic. Jason has come from a background of Laser tag, Arcade Operations, and indoor entertainment centres and has worked with companies that have had operations in Malaysia, The Philipines, Crown Melbourne, and other well known brands nationally around Australia. Seb has a long history with large scale indoor FEC locations, including arcade, trampolines, and food businesses both locally and nationally. Both gentlemen are well known and respected by their peers within the industry. They keep abreast of industry changes and are at the forefront of product and procedural changes.

Wyncity's foundations have been built over many years, the former owners had built a solid business. In the short time since the takeover, Seb and Jason with their many years of experience have been able to bring the Wyncity legacy up another level. A solid grounding in operations, product selection, and technological efficiencies have improved the overall experience and offer at all Wyncity venues.

Wyncity Keon Park was acquired by the duo in December 2021, rescuing the historic venue from certain demolition. It is set to become the premier destination for league and tournament tenpin bowling. Wyncity boasts some of the top Tenpin bowlers in Australia, representing Wyncity as both wonderful staff and coaches. A goal of the directors is to promote and improve the sport of Tenpin bowling.

Any location is a great place for Kid's Birthday Parties, Corporate Functions, Team Building, or just a great Family Day out!

We really look forward to seeing you!